Augmented reality is a research area that aims to enrich the user´s interaction experi-ence with his/her surrounding environment by weaving together computer generated syn-thetic elements with the real world, making the distinction between real and virtual world less perceptible. According to researchers of AR area, Augmented Reality (AR) User Inter-face (UI) is an underexplored area, which faces many design and implementation challenges. These interfaces have the potential to use 3D and 2D elements and adapt them according to contexts in real-time. There are not many AR tools available for the building and visualiza-tion of AR UIs, especially considering context awareness. Therefore, this work presents two different tools that together can assist in the creation and visualization of context-aware augmented reality interfaces: a pattern-driven AR interface visualization framework (VISAR), which allows AR interfaces to be developed by using pre-programmed interface components (patterns); and an AR Interface Editor (VISAR-IE) that supports interface de-sign through modeling their patterns and adaptation rules. These patterns help to speed up implementation and design time, enabling the design of adaptive interfaces, and providing sharing and reuse of interfaces components. Two study cases are also presented to validate the developed tools: AR in a tangible multi-touch tabletop and an AR system for firefighters in emergency management applications. 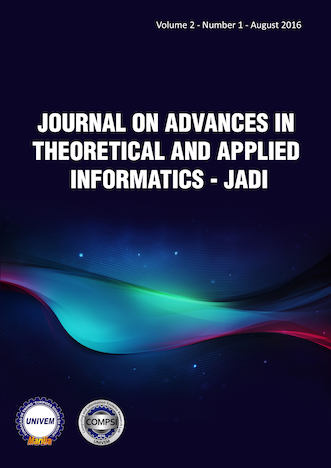 The (A) Assignor declares that (s) text (s) concerned is (are) of his personal authorship, being responsible, therefore, for the originality of the (s) even (s) and gives the organizers, full rights to choice of publisher, publication means, means of reproduction, dissemination of media, drawing, shape, everything that is needed for that publication be effected.

PUBLISHER undertakes to ensure the editorial quality of the publication, ensuring that the concepts and the thought of (a) ASSIGNOR remain faithful to the original. This assignment will be valid throughout the period of legal protection WORK, may hold the PUBLISHER will be shown how many issues it deems appropriate.

All rights are reserved. Any reproduction, even if part of the publication should include the reference credit, according to the current copyright law of Brazil. Still, the article submission process, the author agrees to the terms of an exclusive statement, originality and agreement to the final version. It is justified in the field "; COMMENTS TO THE EDITOR" ;, when the participation of more than one author.